The drive from Orlando International Airport (MCO) took about 30 minutes, and the route is fairly straight forward. You will most likely go via a toll road, but this wasn’t a problem as our Alamo car rental included the Sunpass facility.

Upon arriving at the hotel we checked in, and was impressed by the sheer size of the place, the check in/main reception area is huge and elegant, it overlooks the main pool which is also pretty big, and includes a “water fall” feature. We checked in within about 5 minutes, and all that was left to do was to pick up our car parking pass. Picking up this “pass” is basically just a way to be asked if we’d like to participate in a timeshare presentation. 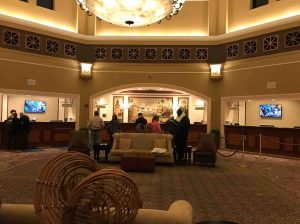 Realistically this pass could have been given to us at check in, but it’s not a major inconvenience as the location we pick up the pass from is just across the floor from the check in desk (about 20 feet). The pass pick up process starts by the member of staff asking if we had theme park tickets sorted already and if there was anything they could do to help us, after we declined we were offered vouchers (I think it was approx. £100 worth) if we were willing to attend an “introduction” meeting about the hotel. When we declined again we were asked why, and our response was simply that we had planned that much for this holiday, that we didn’t have time. The staff member tried to tell us that there were multiple times this meeting could take place, but we just firmly but kindly declined.

We had already read online, via other reviews, that these meetings where actually time share presentations, which we had no interest in whatsoever. So we knew to expect this, which helped. The staff member wasn’t over pushy and we didn’t get bothered by this again during our stay.

After picking up our room keys, and parking pass, we proceeded to our villa block. In advance, we had opted for the “Key West”, which seems to be one of the newer buildings in the complex, right at the very back. It was a good 5 minute drive from reception to our building, which shows how big this place is! There are several huge villa blocks, each containing lots of villas, each block/area had its own pool, several bbq’s and seating areas. 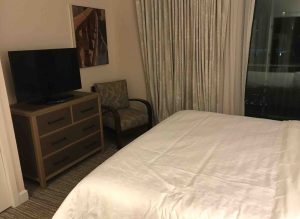 Our room was a ground floor, 2 bedroom villa, which comprised of an open plan dining, living and kitchen space. Within this room there was a sofa, a chair, a 4 seat dining table, a HUGE TV with Bose sound system, and a small kitchen. The kitchen included a fridge/freezer with ice maker, a hob, a dish washer and a microwave oven. A toaster and coffee maker was also provided. Crockery and cutlery was all present, as was washing up liquid, dishwasher tablets, laundry detergent, and tea/coffee (if at any time you need more you simply call guest services and they have what you need sent out to your room). There was also two other doors, one of which led to a washing machine and dryer, and the other led to an iron and ironing board. 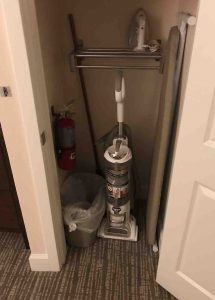 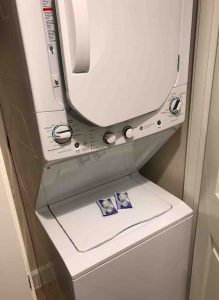 Leading on from this open plan room was a bathroom containing a bath/shower combo. Our bath also contained a whirl pool, meaning an extra special bath could be had! The final room was a decent sized bedroom containing a huge king size bed, chest of drawers, bedside tables and a small inbuilt wardrobe which housed a safe. Again another huge TV with hundreds of channels was included. The bedroom also included a ceiling fan which came in handy to keep the place cool. The whole apartment also contained air cooling controlled from the living area.

The bedroom then led on to a patio area, which contained a table and chairs. The patio area overlooked the Key West pool area, and also contained mosquito nets and a fan for the really hot days, as well as a light for the evenings. 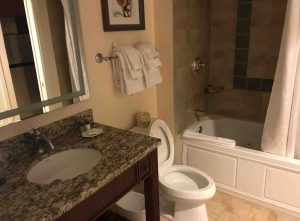 The whole apartment was clean, modern and tidy. As it was a one-bedroom villa, a maximum of 2 people could be comfortably housed, but I would guess if you had a small baby in a cot, you’d be ok too, as the bedroom was big enough to house it. The only real criticism about the villa rooms where that they seemed a little dark, especially in the living area. The bedroom was bright as it was pool facing, and caught the sun, but the front of the villa which housed the kitchen, living and dining area would have benefited from some additional lighting to brighten it up.

Cleaning staff where available every day, but we only opted for cleaning 3-4 times during our 14-night stay, and this was mainly just so we could get a replenishment of supplies (washing tablets etc.). As the apartment contained a washing machine and drier, we could wash our own towels whenever we wanted, so this was just as convenient for us as having the room serviced. 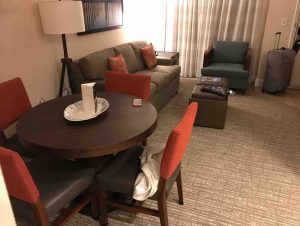 We did walk the grounds a few times and where impressed by how vast they were! There is an onsite shop and onsite restaurant but we didn’t visit either. There is also onsite children’s entertainment/activities by the main pool, and several gyms, tennis courts, volleyball courts etc. dotted about the complex. There are a number of small lakes by each building which adds to the charm of the complex.

We used one of the many gas BBQ’s by one of the lakes, which made for a nice change to eating in the room/eating in a restaurant. We did struggle with the BBQ at first as we forgot we had to turn the gas on at the mains, but otherwise all was good! A staff member asked if we were okay and showed us how to turn the gas on.

The staff members we encountered during the stay where all pleasant, and the rooms contain telephones to let you contact staff should you need any assistance.

Within a maximum 30 minute drive are several Walmart’s, lots of restaurants, pharmacy’s, the Orlando Eye, more outlet malls and both Disney and Universal Theme parks. Sheraton Vistana Villages is in a prime location for anyone visiting Orlando, you do not need a car as there is the I Drive on road train/tram that can take you to Sea World, Universal and Disney.

Overall this was a very good place to stay, especially if you want to visit the theme parks, and we would certainly stay here again!