There is no day 10 due to the fact we barley did anything. We had a leisurely day to have a break from running around the parks, had a nice bbq lunch at the hotel (a blog about the hotel will come soon), and a little bit of shopping. Plans changed and we ended up going to Hollywood Studios, but we only did 3 rides and came home again. Which due to a 15 minute drive and not paying to park it was worth it. 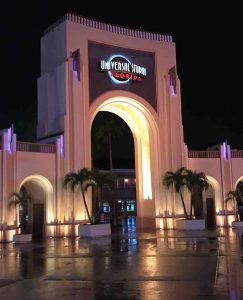 It was still a really good and fun day and when combining planning with the app we still didn’t really have to queue very much to go on rides. The idea of getting the Hogwarts Express between rides is also very handy and convenient. If you have a pass for between parks then this is the best way to get between them. If you look on a map you will see that the parks are very very close together and it is probably just a fence that separates them. However due to where the rides and attractions are placed you cannot just walk between without leaving the parks.

After spending the morning and the early afternoon at Universal we returned to our room to get changed and freshen up for the Blue Man Group. You do still have to pay to park to see the Blue Man Group, which is why we spent some of the day at the park. Once you have paid to park you and leave and return as much as you want to that day.

The Blue Man Group was due to start at 7pm, but you can take your seats from around 6:20pm. As we arrived early we went to try Coldstone Creamery for the first time. This is super cool, you pick your flavour of ice cream (cake batter, vanilla, chocolate, cheesecake etc) and then you choose what you want in it (rainbow sprinkles, nuts, M&M’s, gummy bears, peanut butter etc) and you can choose a sauce (chocolate, caramel etc). You would have to check a website or just see in store for your choices as they are not all the same. It is then made by mixing all of your choices together, so it’s not just a topping it’s actually made into your own ice cream. Check the sizes when you go in as we both opted for smalls and they were hard to finish because there is so much. 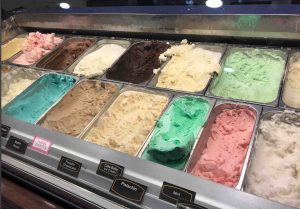 Once we had a little walk around City Walk, and had as much as we could handle of our ice cream, we wanted something savoury. We decided to go back into the parks for some chips (since we were there anyway and had our park tickets on us). 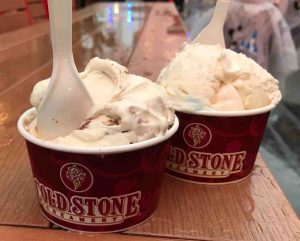 All full up, we went for our seats at the Blue Man Group. We were shown to our seats by an usher, and whilst waiting for the show we were approached by a member of staff. The staff asked us where we were from and if we were enjoying our time here in Orlando, to which we said yes. He then asked if Martin would like to be in the show, which he politely declined as it’s not his type of thing to do.

Many people think that the Blue Man Group randomly select someone to join in the show and do things, however this is all pre planned but you would only know if you have been approached. It turned out that the part Martin was meant to join in, was to be tied up upside down and used as a human pain brush to create a canvas painting. 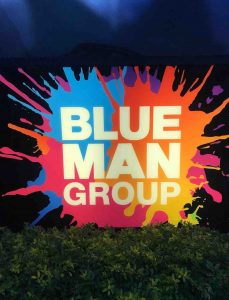 The show is great! It’s about 1hr 45 mins long, without an interval. It is so entertaining and very funny. There’s lots of audience participation, but these were great fun. They incorporate parts of their Rock Concert show with the family entertaining parts (such as the human painting).

It is 100% worth the visit to see Blue Man Group, it is suitable for the whole family. We don’t want to give away what goes on as you really should enjoy it for the first time!