A day away from the parks means a day at the beach. Clearwater Beach to be exact, we already knew we were going here as we had planned it. Clearwater is 2 hours away from where we are staying but we have heard good things, which was why we decided to go.

A 2-hour drive requires a good breakfast! So we went to Denny’s. Not sure what to expect it was filled with locals and tourists all wanting breakfast of course. We had a look through the menu and decided on pecan pancakes. Denny’s was nice, but due to the amount of customers the service was a little slow, but this didn’t bother us.

Now I’m sure we keep forgetting where we are because every time food is brought to us we are amazed at the size of it. The pancakes alone were bigger than my hand and were so sweet! Our waitress gave us maple syrup to drizzle on top but this really would have been over kill. Along with these pancakes came breakfast. We were given a nice cooked breakfast, which works out well to balance the sweet pancakes. However the breakfast was too large for both of us and we both had left a lot of the pancakes as we were unable to finish them.

Full and ready to go we left for Clearwater Beach. The majority of the drive there is not much to talk about, just the standard shops and roads everywhere like normal. However when you reach Tampa it becomes a view of beauty. There are palm trees and water everywhere. The roads became really nice and the views were stunning. We didn’t know where to look, with the sun gleaming down! The drive is pretty straightforward which is nice. 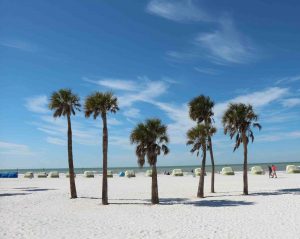 When we arrived we decided to go for a walk along the beach front, it was cold! We both ended up putting jackets on and eventually I changed out of shorts into leggings because it was a bit too chilly. The beach itself is nice, the sand is super soft and if it was warmer it would’ve been perfect, but due to the weather we only walked for about 10 minutes before going into a shop to warm up.

After research before we came, we knew which company we were going with to go out to see the Dolphins with (because this is the true reason we came to Clearwater Beach). Sea Screamer, it cost $24 each. The boat is a decent size so if you are going in the summer then I am sure you will have the chance to go on this boat. The 2 men who go out on the boat with you are really nice and try to keep you entertained. Instead of having a set route to follow they really do try to get you to see dolphins and they try to get you as close as possible. Dolphins are known for swimming in the current behind the boat and so the captain tried to get the dolphins to do this. So they did! So we were able to see the dolphins for a good amount of time and the captain carried on till the dolphins decided to stop. 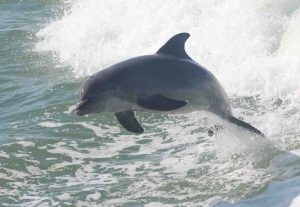 We were then taken on a little boat tour and saw Belleair and the big big houses around there, and we were also told little facts as well. On the way back to shore we saw some more dolphins however these didn’t really want to play and we were told they looked like they were actually hunting fish. The whole boat tour was really good and is worth the money. The staff were nice and friendly and they tried their hardest for us to see dolphins which we did. I would highly recommend going with the Sea Screamers as the other boats didn’t look like they went as fast and so you wouldn’t get the opportunity to see the dolphins swim so close. 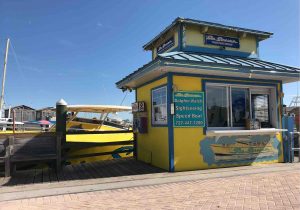 Although it was cold and even colder on the boat, we managed to catch the sun! I actually managed to burn my chest, but this was bound to happen. Overall it was a really good trip and a well worth visit to see Clearwater beach!

After a 2 hour drive back home and a quick stop off for some dinner, we decided to call it an early night ready for Epcot tomorrow.