This is going to be a long one, we spent nearly 15 hours at Magic Kingdom! The park opened at 8 am, however we had breakfast reservations anyway at 8am, and did not close until midnight! That is a very long day for anyone. At least we did enough steps and we reached our Apple Watch goals for exercise for the day (and then some).

I’m not going to talk about everything that we did, however I will leave a list at the end in case anyone wants to ask any questions, as we can only answer about things that we have done.

I don’t know if it was excitement or what, but I got up dressed and ready within half an hour. This was a very big day, first ever time at Magic Kingdom and with breakfast as well! After a little unplanned detour (we got lost), we finally made it to Magic Kingdom and were in such a rush to get through the park that we missed most of the photo opportunities. 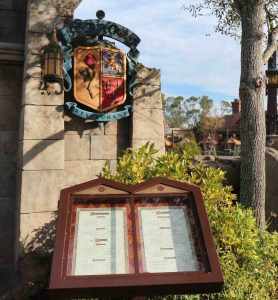 However we were heading towards Be Our Guest for breakfast!! Couldn’t believe we even managed to get a booking, it’s so hard to book Be Our Guest (if you are trying check out the trick we used). Originally we planned an 8am reservation because we would then be in the park before everyone else, however opening times changed at the park and it ended up opening at the same time our reservation was. Not to worry as Fast Pass is our best friend! We arrived, and checked in at the ‘gate’ of the restaurant. When you check in they give you a menu to have a look at, you then walk across the bridge to the castle and wait to go to a cashier where you pay. 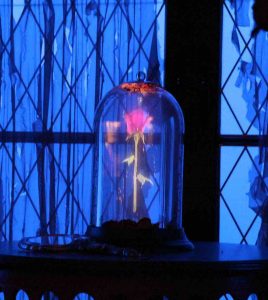 Once you have chosen your food and paid you are given a receipt to display on your table as you can pick any table you want to. There are three rooms, the West Wing, the Grand Hall and another little room. We wanted the West Wing however this was full so we sat in the Grand Hall. You help yourself to your own drinks, but the food is brought to you along with a Danish pastry set. If you want more than one Danish pastry for the table then do separate orders, as it is one per order. The food was absolutely amazing, we both really enjoyed it. It is so magical to have breakfast here, and no words would do it justice! Highly recommend going here for breakfast. 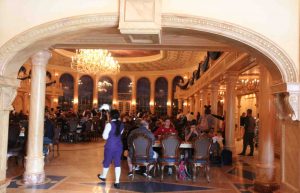 We fast passed the Seven Dwarfs mine train, as we knew this always had a big queue no matter what time of day it is. So we went straight from Breakfast to this ride and we really enjoyed it. What blew our minds was that there is now where to tap your Magic Bands however the video and photo is on your account? If anyone can explain this then please do. It is worth using a fast pass for as the queues very rarely drop below about an hour and a half.

Our next fast pass was for Space Mountain, this was so much fun! We really enjoyed this ride so much, however we had to get 2 photos as they were done separately but oh well. We queued for a total of about 5 minutes for this ride even though there seemed to be A LOT of fast pass people going in when we did. The whole ride is in the dark and you can’t see your own hand in front of your face but it feels like you are in space due to the way small LEDS are placed. Great highly recommended ride.

Once we came off Space Mountain we had some time spare so we walked around a little and ended up going into Monsters Inc Laugh Floor. This was amazing! Again if anyone knows how it works please tell us, the monsters perform comedy on stage however it is very interactive and it doesn’t matter where you are sat in the audience you could be picked on. Jokes are told that were text in by people who were in the same room, and the monsters talk directly to specific people in the audience. This was extremely well executed and I could have spent several hours sat in there watching this performance. 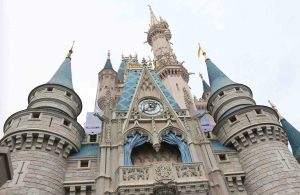 Big Thunder Mountain was our final pre-planned fast pass for the day and once we went on this ride we started to look at what our next fast pass would be, however this kept changing as the wait times for rides where up and down all day. We managed to get onto a lot of rides and always had very little queues. Again we only waited probably 20 minutes at most for any ride, which was great!

We did 2 character meets for the day, one with Snow White who was lovely, but she didn’t stop talking at any point, which was really strange. The other was with Pluto and I think he has been my favourite so far, he went straight in for a big hug and it was great. We only met Pluto because we were walking to the parade and we saw him so just went straight over to him. I love how spontaneous the meets are. 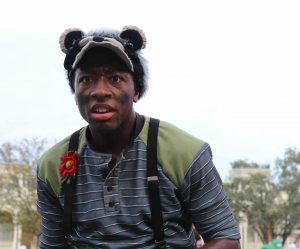 The parade was fantastic! We loved watching everyone going passed, one of the Lost Boys came straight over to our camera and asked what it was, one of the dwarfs was playing with a little boy near us. It made us both smile and everyone else nearby. The parades are great fun to watch and you don’t have to be stood right at the front to see it so you don’t need to panic about being there early and reserving your own space. Please bear in mind that we went at the end of January when it is rather quiet in the parks anyway. 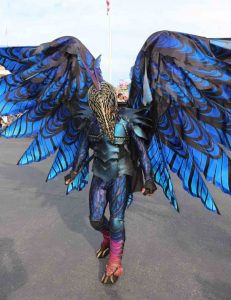 We made the decision to go home at this point so we could have a relax and return later as the park open until mid night on this particular night. Also worth noting is that once you have paid to park you can leave and return as much as you want to that day and you can go between parks. We went home for a good 2 hours before being back in the park for 7pm ready for the 8pm fireworks.

As you can imagine everyone wanted to see these fireworks so the park was now packed all down main street up to the castle. We watched the warm up show/fireworks before choosing to go on a few rides since the queues were so quiet. We went on; Haunted Mansion, Jungle Cruise, Pirates of the Caribbean and Winnie the Pooh all within about an hour. Then we took a stroll around the park before going to see the evening water boat parade. 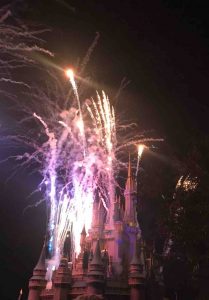 The boat parade was ok but was not really worth the wait, however if there were fireworks then we didn’t stay for this. It started at 10:35pm and it goes from Magic Kingdom around the resort hotels. After Magic Kingdom we decided to go home as it was now 11pm and it had been a very very long day for us.

Magic Kingdom was all I could hope for and more, it is such a wonderful and magical place and you can’t believe you are there! If you ever have the chance to go then please do as no matter what your age is you will thoroughly enjoy it!

Pirates of the carribean,