Our second full day in Orlando! Still can’t believe that we are here, it’s amazing and I keep thinking how wonderful it is to be here. So we decided to go to Universal Studios. Where we are staying is situated really nicely between Disney and Universal so all the parks are around 15-20 minute drives away. 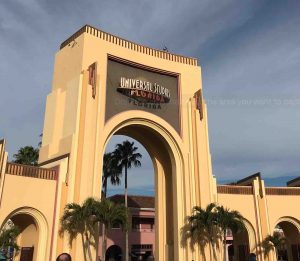 Universal Studios opened at 9am, so we decided to get there for opening. Once parked you go over a couple of travelators, you then go through an airport style security check (which is good and very very quick). From here you walk through City Walk, which is restaurants and shops, and a cinema. Before arriving at the entrance to the park you pass the big Universal globe where everyone stops for photos (this can be done later so we just rushed passed everyone).

Our theory is that everyone will go into theme parks, see the first ride and get on it. So far this has always been true for us, and today was no different. We walked straight to the back of the park to get on a ride (as we weren’t paying for fast passes we needed tactics today). About halfway round the park we decided to go on Transformers, this ride was amazing! It completely blew our minds and might be our favourite in the park. It uses 3D technology along with a ride and acts as a simulator but works so well! We managed to walk straight onto this ride and due to lack of queues we were back off before people were reaching the middle of the park.

So we continued our path to the back of the park and got on Men in Black, this was really good! There were literally 6 of us and we walked straight on to this ride as well with not a single person in front to queue. This was a shooting ride, but it was a ride! It spins you around and speeds up and slows down so is not a continuous movement, but it is great fun! It also involves a little acting at the beginning where you get into a lift and you are told you will be going into training. However we think this is to stagger queues when it is busier.

From here we went onto The Wizarding World of Harry Potter, maybe we should have started here but we didn’t. This is massive, it takes time to walk around but it is done so well you forget where you really are. We went straight for Gringotts Bank as we caught wind of it being a short queue. This queuing system is huge and seems to just keep going on, however we didn’t really stop and stand at any point as we kept on moving and ended up only queuing for around 15-20 minutes. The ride was amazing, a lot like Transformers however it is Harry Potter themed of course. It is a simulator but also a ride at the same time, and it plays with your mind as to what is real and what is 3D projection. I would recommend going on this and I would say it is worth an hour wait if you find you have to wait. We just seem to keep getting lucky with a lack of queues wherever we go. 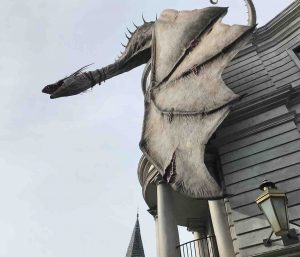 To keep up with Harry Potter we then went to ride the Hogwarts Express, we weren’t really bothered about going to see Islands of Adventure as we are coming back later in the holiday but we wanted to ride the train and see the cool movie bits out of the window. It really is so good! You just don’t know where to look and I find it fascinating that it really is a moving train that you are on, this just adds to the magic of traveling between lands and adds to the ride magic as well. The videos out the window are different depending on which direction you are traveling.

Now in Hogsmead we thought we may as well have a little look, and due to it now being just before lunch time we thought we should have a Butterbeer. I cannot explain what it tastes like but I would say it is strange (neither good nor bad). We looked at Harry Potter and the Forbidden Journey and the queue time was 30 minutes, and since we had our drinks we thought we could stand this queue time. It ended up being around a 20 minute wait, but that was more than enough time to have our drinks. This ride was very much like the Gringotts Bank ride but instead of being inside Gringotts, you are playing Quiddich with Harry. 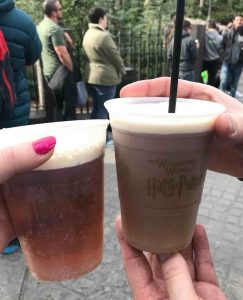 After taking the Hogwarts Express and returning to Kings Cross station we took a last walk around Harry Potter and then went on our way to Springfield. Now we had actually walked through Springfield earlier in the day, however we did not stop to look around. Here we went on the Krustyland ride. This again is a 3D simulator where you are in a car of about 10 – 15 people. This ride made me feel really sick, though that said it is a good ride. I only felt sick due to having been on so made 3D simulator rides in a short space of time and I was getting rather dizzy.

Then came our first Universal Character meet! This was with Scooby Doo and the gang, in front of the Mystery Machine. This was funny, I had a tattoo chocker on and Shaggy asked me if I remove it does my head fall off, so I took it off slightly to show him. Scooby didn’t say anything but the rest of the gang were very interactive and great in their characters. We found that overall there aren’t many chances for character meets in Universal as we didn’t do any others this day.

Time for lunch! And a nice big one too! Hard Rock Café was the venue of choice and the service and the meal was really nice. The food and drinks came really fast and our drinks were topped up when they had just less that half a glass left. We would recommend it and we didn’t think it was really that expensive as it worked out similar to what we pay back at home when we eat out. Hard Rock Café is located within Universal grounds however you do have to leave the park to get to it so have your passes ready to get back in afterwards.

Upon returning to the park we went straight into Shrek 4D and here we had no more than a 10 minute wait. This was good, very much like all standard 4D experiences.

Jimmy Fallen, this was good! To wait for this ride you enter a TV studio and you are actually entertained by accapella singers! This is so much funny and they interact with you as well. It is worth noting that you queue virtually for this ride so download the Universal app to do so, as well as checking ride times. Once you get through then it is yet another simulator with Jimmy Fallen racing through New York in some strange futuristic car. This was alright, worth the ride since there isn’t really much to queue and wait. 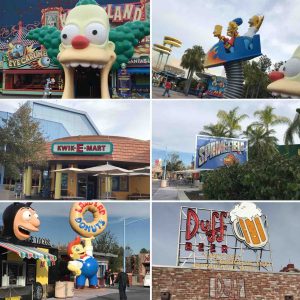 The parade! Woooo, this was good. I don’t think I realised how much was Universal until this parade, but it was fun to sit and watch. The characters go by on big floats just like they do in most other parades, along to theme music from their shows. We watched this from next to Despicable Me ride and there was no fighting to see or anything so it is a good spot to watch from. It also meant we could just straight onto Despicable Me as the ride queue was A LOT shorter straight after the parade as everyone was busy watching the parade. We queued up for 15 possibly 20 minutes even though the sign said 30. This was… You guessed it! Another 3D simulator. This is Universals one trick wonder but it does work really well, and its where Gru is trying to train you up to be a minion. The children seemed to really love this ride! It is just as good for adults.

Checking online Transformers queue had gone down again so we decided to end the night on there, as it was our favourite ride of the day. It did not disappoint the second time around! If there’s any questions feel free to ask us, we managed to get onto all the rides that we wanted to go on and more and never waited more than about 20 minutes (I think we just have really good luck with rides! However tomorrow is Magic Kingdom on a Saturday so we will see.)