How exciting is this?! We are actually here in America, after a 9 hour flight. Our first official night was spent unpacking and shopping at Walmart for a few bits for our apartment for breakfast and snacks. That went really well and we were amazed and just kept on adding to the trolly because all the ‘American’ sweets were really cheap (of course, we are in America after all).

So our first proper full day started with a 5:30am wake up – even though we planned to have a lie in – we both just woke up and sat there wide awake questioning whether to get up or not. 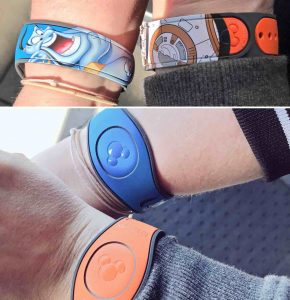 We decided to just get up and get ready for the day and we found out that IHOP is open 24hrs, so that decided where to go for breakfast!! After a couple of phone calls home to say hi and see how everyone was we finished getting ready and went to IHOP. Where we had great service, this was our first eating out experience in the US and it was fun. We’ve heard about the customer services but that was really good and our server was so kind and friendly. We both ordered a breakfast pancakes meal and our server was very shocked that we both finished everything (what? Do others usually leave stuff??) This IHOP was only minutes down the road from where we are staying so we will probably be back at some point over these next 2 weeks.

We found driving to Hollywood Studios a breeze, and arrived from IHOP in around 15minutes. Parking is also a breeze and everything is clearly signposted. We paid our 20-dollar parking (seems expensive but it is valid for the full day, and you can leave and re-enter later if you wish, this is also valid for all Disney parks if you wish to drive between them). We then got a small shuttle road tram from the car park to the main entrance (realistically this is only probably a five minute walk anyway!)

Initially when we entered we just had a walk around the park to gain our bearings! It’s not a huge park and it’s pretty easy to navigate around. That said, the park is expanding and a new Star Wars land is due in 2019, I think this area looks pretty big too! Although the park wasn’t majorly busy, having the fast passes did give us an advantage over the other none fast pass guests, and we did generally board the rides in a much quicker time than the standard lines. However to optimise our waiting times we combined our fast passes with the use of the app to find out where we could get into quickly between fast pass times.

Walking down the streets of Hollywood Studios we came across Chip and Dale, so went for our first ever character meet. It was a strange thing to do for the first time ever but it was fun, this also gave us the chance to see how the Memory Maker works with Disney, and it’s great! All you have to do is get the photo taken by the photographer and then let them scan your magic band and it will appear on your account in the app within minutes (however it can take a couple of hours so don’t panic if it’s not there straight away).

Our first attraction was Muppet Vision 3D, a very simple 3D theatre based attraction, but like everything here, it was executed flawlessly! It features animatronics, 3D screens, light effects and other fun stuff! We didn’t fast pass this, but there was virtually no queue, which was why we went in. That combined with trying to pass time till our first fast pass ride. 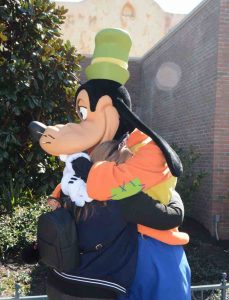 After this we did another character meet on the street – and this time it was Goofy. Again the queue was only a few minutes long which was why we did it as we had a few minutes spare before our ride. Goofy was funny and very very interactive! Great for kids, he dances around and plays about before having his photo taken. On from here was the Star Tours ride, again another 3D ride but executed really well again. I won’t spoil it too much, but you are in for a treat if you are a Star Wars fan or not! We did fast pass this and queued for approx. 5 minutes if that. This is an amazing queuing system and features lots of Star Wars related props, animatronics and other cool stuff!

Next ride was Rock ‘n’ Rollercoaster Featuring Aerosmith, this is a high-speed indoor coaster that is very fun! The top speed is around 60mph, so is pretty fast! Before you even board, the queuing system is good, and Aerosmith make a feature in their “recording studio”, onto the actual ride, it starts fast, and features some twist, turns, and some rollovers! Once the initial start, it doesn’t seem to slow down until the end and is over very quickly however it is a fantastic ride to go on! As with Star Tours we did fast pass this so only queued for about 5 minutes again, it is worth fast passing this ride, as it is popular.

After this we went on to see the Voyage of the Little Mermaid, which is a mini musical stage show featuring UV elements, lights, lasers, and lots of cool effects – no fast pass this time, but queue was only about 10 minutes long, we opted for this after seeing the queue time on the app. This is really really good for children, although it is still just as great for adults as well.

Then we visited Beauty and the Beast – Live On Stage. We didn’t fast pass this either as we went over about 10 minutes before it started and this was only because we were passing by. The theatre has so many seats, there was no queue. This is a great musical show lasting about 30 minutes and gives a brief summary of the film. Nowhere near as good as the real thing, but a pretty good experience in its own right.

We then visited the Star Wars Launch Bay, which contains props and models from Star Wars. As well as this there are various areas to meet different Star Wars characters and we decided to meet Chewbacca. A small queue again, a quick snap, and we where back out. There’s no real way to communicate with Chewbacca, as he doesn’t speak English! But he did make some grunts and noises that we can only assume where greetings! As we had Memory Maker, all of the photos from the day where included. This proved to be a great added value bonus to our tickets. We have so far, ended up with about 30 photos, for free, from our visit to Hollywood Studios! We would both very highly recommend Memory Maker if you can get it, the ride photos are the funniest.

Next was our fast pass visit to The Twilight Zone Tower of Terror. Again, a really good and fun queue system, and a terrifying drop! There’s a build up, featuring some digital projections, but ultimately this ride ends in a 13th floor drop! When you reach the top of the tower, the doors open, revealing a view over the park that is pretty epic! The ride drops and rises several times, which we didn’t expect, but is very exhilarating and again, really well executed! 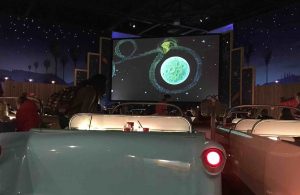 We then stopped for lunch in the Sci-Fi Dine In Theatre, originally when we arrived we where told we’d have to wait up to 30 minutes for a table, we waiting about 1 minute, and then we got seated. When we arrived we gave a phone number so they could text us when a table would be ready, we walked through to the bar sat down and then about 10 seconds later was a text to say our table was ready! Good service, great food, and well worth a visit! Its worth noting that you only get to sit in one of the “cars” if you have pre-booked, otherwise it’s standard tables at the back of the room, still very good though. It’s fun to sit and watch the mini movies whilst you have your dinner and some of them will take you back to your childhood. 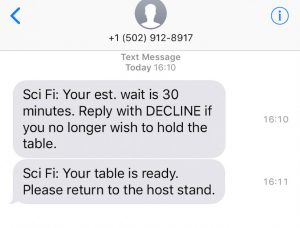 To finish off the evening, or so we thought, we went to see Fantasmic, Hollywood Studios evening show, featuring fireworks, water, light, sound, fire, video, characters and audio effects! Words cannot describe how well this is executed and you really do have to be there and experience it for yourself! It features some good vs. evil content, and good (Mickey) ends up winning in the end! The theatre this is hosted in is huge and seats about 8000 people, meaning this place gets packed, and the atmosphere is electric! 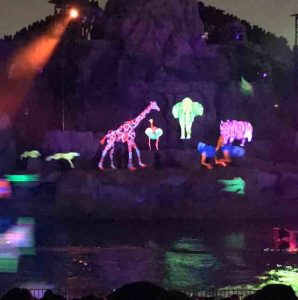 We had originally planned to leave after the Fantasmic show, however we found (after checking on the Disney app) that Rock ‘n’ Rollercoaster Featuring Aerosmith had virtually no queue as we left the Fantasmic theatre, so we took the opportunity and rode again. This time around it was equally as fun and we both really enjoyed it! This is a great time to get one last ride in as everyone is either heading home or going to see the next light/fireworks show.

This was a great end to a wonderful first full day in Orlando, we had a lot of fun and were both very surprised at the amount that we were able to do both with and without fast passes. It’s really nice to take the time to realise just where you are, as this is somewhere that we have both been waiting a very very long time to get to, and we have not been disappointed thus far.