Legoland is a favourite of ours, we enjoy the park and it always makes for a great day out. If you want to go with kids it is fantastic! You do not have to stay at Legoland, we stayed in Maidenhead which is only a 10 min drive (and significantly cheaper). This was our last day and we knew that we would be going from Legoland back to Liverpool. Legoland is included on our Merlin Annual passes, and last time we had them we went to Legoland several times that year, though it was a lot easier when I was living down there and we didn’t have to pay for a hotel.

After waking up (and not wanting to get up), having a lovely full cooked breakfast (and maybe some pancakes as well, got to be ready for the day) and checking out of the hotel we left for Legoland. It is only about 10 miles away from the Maidenhead Premier Inn, so we would recommend it if you’re wanting to go to Legoland and it not cost you a fortune!

As planned we made it to the park for the opening time of 9:30. We parked the car, double checked we had what we needed in the backpack (KAGs, hair brush, purse etc) and headed into the queue. We thought (as most people would) that once you are in, everything is open and you can go on rides etc. However you could only reach specific parts of the park until 10am, you were unable to get to the rides, but you can walk around the mini Lego city’s. Everyone bunches up and gets as close as they can to the staff that stop you from getting any further. Everyone waits until 10am and then suddenly runs to the rides. 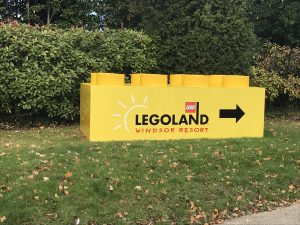 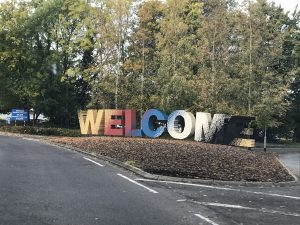 We didn’t run, but we know that we can get on most rides without to much of a wait. I think most adults know this but we’re convinced we were the only people there without a child. Honestly it really is great fun for adults, we have never been with a child and we always have fun at Legoland! 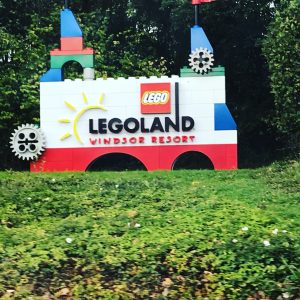 We started with the Dragon because it’s one of our favourites and as the day goes on it gets a bigger queue. We didn’t manage to get on every ride that we wanted, unfortunately the Sea Life ride was closed, and the wait for a couple rides were just to long for us. As we knew we were limited for time and wanted to leaver around 3pm for the journey home we had to go on the rides we liked the most, and had the shortest queues. 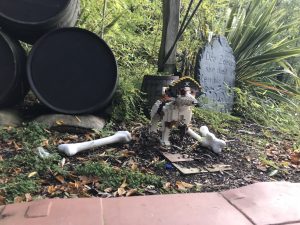 One ride was new to us, and I think it is new to the park. It’s Ninjago, ready for the new Ninjago movie that Lego are bringing out. We decided that since it was the only ride in the park that we hadn’t been on then we would go for it. We queued for over an hour and a half! Every single time you think you’re nearly there…. You’re NOT! There’s about 5 different sections of the queue, then you go upstairs and then there’s another queueing system, but then finally you can see the ride. You think after all of this, the extensive queueing system, there’s lots of bits of entertainment for kids. Lego building, little wall mazes, things to look at etc. Anyway, by the time you get to the ride you think that it’s going to be amazing. It is an interactive 4D ride, and if you look at it on the website it is hyped up a lot. In reality one of the sections didn’t actually work, so Martin was unable to build up points and ended up just watching the stages. Even when it does work, it’s not really fun. The ride lasts about 2 minutes (if that), and it doesn’t work as well in practise as it does in theory and is basically you just waving your arms around to try and get points but you cannot fully control what goes on because you’re unable to aim. 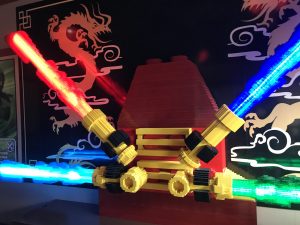 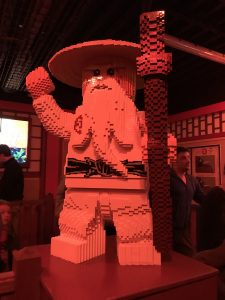 All in all I WOULD NOT recommend queueing for more than 10 minutes for this ride, even if you really really really want to try it. It was a very big disappointment for us, it might be your thing, but it is not like what they describe on the website. Not everyone likes the same things, but we love 4D, this was not 4D. It was a 3D screen that you semi-interacted with.

Other than Ninjago, I would probably recommend all of the other rides at Legoland! The waits usually aren’t too long. Especially for the Rapids, which every time we go to Legoland we ride the rapids several times. This time we went on it 3 times consecutively and the queue never really builds up. Our longest weight for the rapids was around 3 minutes! It’s a nice flowing ride, and even when you’re not getting sprayed with water, it’s a lot of fun. It is near the front of the park so we did it last. 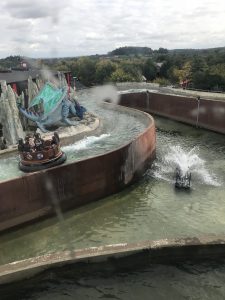 When we go to theme parks we go straight to the back and work our way back to the front. This way you usually get the shortest queues as most people will go on the first ride that they see at the front of the park and work their way to the back. By the time everyone else is at the back of the park you are at the front. In theory this would be perfect and you would never stand in a queue, but in reality there is always a queue… It’s just about getting in the shortest queues possible for all the rides you want to go on.

We managed to go on almost every ride we wanted before leaving at 3pm, and we also had a good half hour or so sit down for lunch. Legoland also has pirate shows throughout the day that we would HIGHLY recommend seeing and they are great! 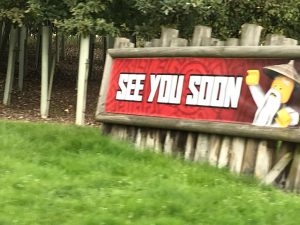 If you have any top tips for Legoland then please do let us know!

Don’t forget to check out our Twitter and Instagram to stay up to date with where we are and what we are up to! 😀