Blackpool’s ‘Ride the Lights‘ is an evening where prom roads are closed to cars and everyone gets on their push bikes. This is a great and safe way to see the Blackpool Lights, and get a bit of exercise!

It’s a fun evening and a great exercise where you don’t feel like you’re exercising because you’re too busy looking at everything going on. Ride the Lights has been going on for 11 years now, and last year was the first time that Blackpool Pleasure Beach opened up as a route for the event. This means that you can actually cycle through the Pleasure Beach.

It’s only 40 miles away for us, and I did my first one last year and really enjoyed it so I made sure I was able to go again this year! I ordered a mount for my GoPro for my bike handles so I can record the ride, and Martin has one for his helmet – we tried doing this last year with one GoPro but ended up taking a good thousand photos instead of recording, but this time we know how they work.

We drove up there early (as we did last year to get a good car parking space) and went into a chippy at the Fleetwood end to have a nice fish, chips and mushy peas before the ride! This year we drove up there in our biking gear so we had no need to go and get changed, so once we had our food decided we would get the bikes off the car and maybe go in the arcade. This year when we went to our car we were told to move because it was becoming a no parking zone, we had parked there last year so couldn’t see what the issue was but moved the car anyway (this actually worked to our advantage later). After driving round for a space – which as you can imagine was hard to find given it was now about 6:30 and the ride starts at 7 – we found one near the route but not blocked off.

So we unloaded the bikes, got our GoPros and grabbed our helmets, and we headed over to the arcade. There’s this one machine that always has Minions in it (my favourite!!) and it’s actually really easy to win. Last year I did it in about £2, this year it took me £5, I think. Nevertheless I won the Minion! And then we went to play on Time Crisis for a bit, because it is only 50p per play at this arcade and all others are £1. Now I had the decision of going back to the car to put my Minion in or mount him to my bike somehow… So I mounted him to the front of my bike using my bike lock. 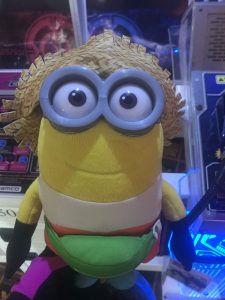 The Minion that I won in the arcade

My pink bike, with my Minion on the front.

So we started the ride, down the Fleetwood end. The lights weren’t on yet but it wasn’t dark enough to have them on, however we didn’t want to be out really late and have the drive home so we just went for it. By the time we reached the Star Gate end it was getting dark enough for lights. So we put our bike lights on and I put my fairy lights on that were around the frame of my bike. The ‘Ride the Lights‘ really starts when it goes dark and everyone has their lights on. It’s so much fun and it is great to see everyones lights and different gimmicks such as dodgems and rockets and even ET!

On the way back, Blackpool Pleasure Beach was open to ride through. This is great fun because it’s different and you see the theme park when all of the rides are off and no one is walking around. Since they limit the amount of bikers going through at any given time then there is always space and it doesn’t get as congested at the road does. 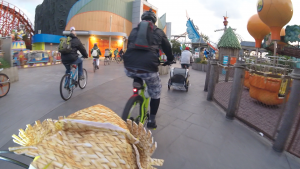 Riding through Blackpool Pleasure Beach – Shot is from my GoPro

The lights in the dark – towards the Fleetwood end.

I would recommend anyone who enjoys riding their bike, or walking their dogs, or simply seeing people come together and have a good time… Go and visit ‘Ride the Lights‘ one year. It is a family friendly event and everyone has so much fun! If you do not own a bike or do not want to ride, then there are the illumination trams that operate along the route all evening. It doesn’t feel like you’ve rode that far because you’re looking at all the lights and people dressed up. It is always a late night getting back home but it is worth it. The exercise and the fun you having doing it is great!! I cannot wait for Ride the Lights 2018. For more information about 2018 Ride the lights, simply click here to go to their official page.