Recently, we have been trying to get an 8am reservation for the Be Our Guest restaurant in Disney’s Magic Kingdom, this is difficult to say the least! At first we had been loading the My Disney app or website (this hack works for both!) picking the restaurant and choosing a date. Then under the “Time” drop down menu, we had been choosing “Breakfast” – logic would say that this is an ok thing to do, we want to eat during breakfast, so pick breakfast… but no!

First we were searching just for breakfast, however look at the available times a search for “Breakfast” was revealing… 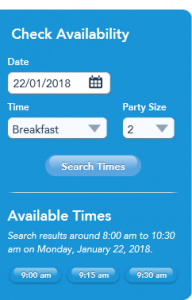 As you can see the earliest available time shows 9am, however we wanted earlier than this so that we were already in the park before the opening.

Then this is when the strange ‘hack’ comes in, instead of picking “Breakfast”, pick a time. So, pick 8am for example. Look at the results we now get… 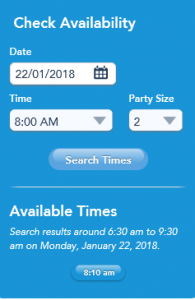 Instead of the initial 9am, we can now book for 8:10, which is actually very misleading. Why can we now see 8:10 when under “Breakfast” we were only seeing 9am?

The two searches were performed within about 10 seconds of each other so nothing really will have changed in this time, it’s just two different sets of results, and in our case, the second search method worked better for us!

So if you are looking to book breakfast as early as possible for a restaurant that books up as fast as Be Our Guest does, then try selecting the time instead of the meal that you are looking for.

Try it out! Let us know if it works for you.