You know when you wake up knowing it’s your last day of holiday and you have to pack? It’s never as fun doing this packing as it is before you go away. Nevertheless it has to be done! When packing for coming home, we do this very differently! I like to pack as neatly as I did when I left my house, but with dirty and clean clothes separated, however Martin just shoves all the dirty clothes into a bag a zips it shut – everyone’s different.

For the final time, we woke up and got ready for the day. Back to driving today, we had to get the car park ticket stamped at reception to get a discounted price, but it still came to a whooping £47 that we were both very surprised at! When looking at hotels check the parking if you do travel by car and maybe call them up to find out exactly how much it will be if you’re going on a budget. A quick trip for fuel, and a DIY clean for the wind screen because it had that many dead bugs on it, it was hard to see out of the wind screen. Martin made a little mix of coke and water (A LOT more water than coke) and gave it a good scrub.

Today we decided breakfast elsewhere would be a nice change, so we went for a drive over the river Clyde and had breakfast at Frankie and Bennys (a nice chain restaurant that serves food all day and is reasonably priced). Usually we like to opt for the ‘Stateside stacker’ because you get everything of a full english, on a rosemary bun, however today was different and we both got bacon and syrup pancakes – preparing for America! Our waitress was very friendly, like I said in other posts we didn’t meet anyone who wasn’t anything other than kind, friendly and very attentive. Breakfast was really nice and felt like a good set up to the day. 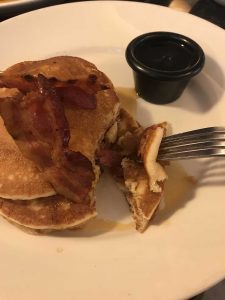 Feeling nice and full, back in the car and start the 200 mile journey. Knowing we would stop at some point we discussed if there was anywhere in particular we wanted to go on the way home or just see what we see. We went for the ‘see what we see’ option, which can be interesting. After passing a few Edinburgh signs we considered going back for the day but then realised that it was an hour in the wrong direction so swiftly jumped back on to the motorway and carried on.

The first stop actually ended up being at a random services, it was really nice. What looked like a normal standard services on the outside, ended up having a huge pond and waterfall out the back where you could walk if you wanted to. However we had only stopped for a toilet break, we didn’t even get any food (we were still pretty full from breakfast), so we didn’t walk around the pond but we did have a look. 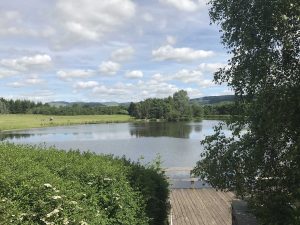 Lake at the services 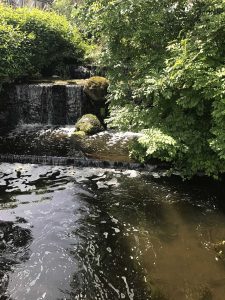 Waterfall at the services

As that stop was only at a services we were still waiting to see if anywhere sounded interesting, and then suddenly saw signs for Penrith. People might think ‘why Penrith?’ but it was simply somewhere we had never been before. We came off the motorway and parked at a Morrisons because we had no idea what would be around. Today like all the others, was really warm and again we were walking around in shorts and tops. We had a quick search on our phones and started to walk into the ‘town’, which turned out to be down a steep hill (and I noticed another car park that would’ve meant we wouldn’t need to climb the hill to get back to the car!) Anyway, Penrith was a nice break from driving and made for an alright little walk but there was nothing really there. No real sights, or interesting things going on. It was nice to stop and at least having been we know we won’t be stopping there again. I wouldn’t say don’t go, but I would say do not make it a day trip as we barley filled an hour there.

Back on to the motorway yet again, we had left Scotland to head home over 4 hours ago and were getting rather tired now. I ended up having to stop at Charnock Richard services to swap so Martin could drive because I was struggling to keep my eyes open!! So he drove the last 40 miles for me.

Finally we are home, unpacked and shattered from having such a wonderful 4 days in Glasgow! I would definitely go back, for the shopping if nothing else – but the buildings are pretty cool too. In total we ended up spending £870 but we didn’t hold back from shopping and treating ourselves at dinner time. If you want to see more of our photos from our time at Glasgow then head over to our Instagram page to have a look.