After the long walking and never finding an end to the shops and the town we decided that for today we would get the train into town and see how much further we could go. Initially the plan was to hop on the Sightseeing bus, but after a phone call we found out that there is a 10K run and the buses would not be running till 2:30pm. So we opted for the train, as it was only 1 stop, 2 mins and cost £2.50 for both of us (who can complain). Despite getting the train and not walking in, we still did just as much walking as the day before!!

We had a plan, to leave the hotel around 9:30, get into town, have a little walk around and then go to the cinema to see ‘The Mummy’ (we see a new film pretty much every week!!). We booked the film in advance so we knew we would need to get to the cinema for about 11am. When we went and got the train, we got off at Glasgow Queen Street station and walked around the corner, to which we discovered what was both the half way point and the finish line for the 10K run. The 10K was a mens race, and is for male suicide, it is held every year and can be entered online. It was great to stand and cheering people on at the half way line and then about 10 mins later the first people were crossing the finish line – some of them didn’t even look like they had just ran 10k, I was proud of the people passing the 5k mark because I don’t think I would be able to do that!

After a bit of time, we realised we needed to head to the cinema – we didn’t know where it was. When we found the Cineworld, which is in the town centre, we thought it looked very modern on the inside. Then we started going up (we were in screen 7, which was on floor 4), it felt like we were going up forever, I leaned over the side of the escalator to see how high the building was and it was huge. I think it was about 12 floors (if not more) high. However this cinema has lots of extras from normal cinemas; there’s a foyer with food and drink on every floor, there’s a 3D screen, a VIP screening and a 4DX screen. The 4DX sounds really good, but we didn’t want to spend all of our time in there so we went in to watch The Mummy (which was a really good film), came out and forgetting how high up we were we proceeded down all the escalators.

Another walk around town? Sure. Surely we’d seen most of it, but apparently not. The town is wonderful, the buildings are huge but they all look beautiful. Nothing feels out of place, and there are a lot of little back streets that aren’t even grubby or anything. The city centre is kept very clean and at no point did either of us feel unsafe. We visited a few shops and got a couple of postcards to send home and to friends (we do this everywhere we go) as well as a couple of presents to take home as well.

As always whenever we are in Scotland I HAVE to have Irn Bru, I love Irn Bru anyway but it feels more special when in Scotland. Especially because in places like McDonalds they have it on tap. So for lunch we had to have Irn Bru with our meal. I also love that you can buy Irn Bru things such as rock and tablet. 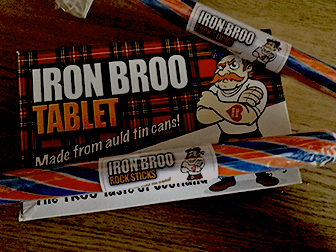 After a lot of walking in the hot hot sun, and getting all sticky and sweaty we went back to our hotel to cool off, shower and get ready for dinner. We had already planned to go to the Hard Rock Cafe while we were here so decided that tonight can be the night! The restaurant was lovely – this was my first time at a Hard Rock Cafe – the staff were really nice, friendly and attentive. Both of us were unsure what cocktails to order so our waitress suggested the “local” ones. We had to get the glasses as well, so we both opted for the hurricane glasses. The cocktails were both really nice! For food we ordered a burger and mac and cheese, and both meals were so tasty and really big, I was unable to finish mine! It was one of the nicest meals I’ve had. The waitress who sat us and the waitress who took our order were both very kind and friendly and made us feel very welcome. At no point did either of us feel uncomfortable, and we would both go back! You can see our Hard Rock Glasgow review here. 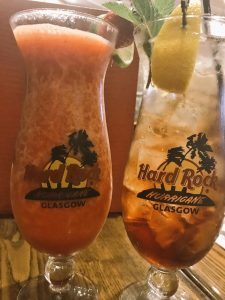 We went on from here to a local pub for a few drinks, as it was still really warm and bright we chose to sit outside. Day 2 was fun, we did just as much walking as on day 1 and really enjoyed ourselves. By the time we got back to the hotel we were both ready to re-charge for day 3!